Traffic and revenue figures for the Eurotunnel Group

Strong progress in the third quarter of 2012

“This summer, on the back of a dynamic first half year, Eurotunnel again set new traffic records. Our flexibility enabled us to provide an excellent quality of service and to attract new customers away from the airlines. We are confident in our activity levels for the end of the year, whilst always remaining vigilant due to the nature of the current economic environment”.

On 18 October, Eurotunnel celebrated the passage of the 300 millionth passenger to travel through the Channel Tunnel since its opening for commercial services in June 1994 - the equivalent to almost five times the population of the United Kingdom. Thanks to the mobile telephone system installed in the south Tunnel in July, one happy customer, Mr Chris McCairns, received a text, 100m below sea level, as he was travelling back to the UK, on his way home in the south west of England, telling him he would be able to travel on Le Shuttle free of charge for a year.

Revenues for the Fixed Link increased by 10%, at a constant exchange rate, to €591.3million, compared to the same period in 2011. Truck Shuttle traffic for Freight Shuttles grew by 19%. Car traffic on the Le Shuttle passenger service continued its positive trend with a new increase of 7%. The Tunnel saw very high traffic levels this summer at the end of August, the 80,000 vehicle barrier was broken the highest level of traffic achieved in one week since the end of duty free sales in 1999. A new daily record was also set on Saturday 11 August, when a combined total of 15,152 cars were carried in both directions.

The Channel Tunnel reached a decisive stage in the interoperability of its network with the obtention this year of the implementation of the Technical Specifications for Interoperability for rail freight trains travelling through the Tunnel. The test in the Tunnel with one of the latest Alstom locomotives, the Prima II, on 29 September was conclusive in this event.

With a similar intent to move forward, Eurotunnel obtained agreement from the Inter Governmental Commission to remove the canopies from the Arbel truck shuttle wagons, thus improving safety and leading to gains in energy efficiency. The removal of this equipment which has no equivalent on any other piggyback system reduces weight and loading time. Beyond the savings in maintenance that will be achieved, this technological stride opens the way for a third generation of Truck Shuttles, which could open up access from the Tunnel to multimodal terminals.

Eurotunnel Le Shuttle won the “Best Train Operator” award for the second year in a row at the Guardian and Observer Travel Awards 2012, on 29 September. These awards are voted for by the travelling readership of the Guardian, guardian.co.uk and the Observer.

Eurotunnel won the Deutsche Bahn prize for the “Best Supplier” at the Innotrans Exhibition. Deutsche Bahn, which works with 35,000 suppliers from around the world, emphasised Eurotunnel’s commitment to delivering a reliable service, boosting competitiveness and also the high frequency of Shuttle departures between Calais (France) and Folkestone (UK).

Europorte continues to develop in the infrastructure management segment, winning a series of contracts with the ports of Paris, Bordeaux and Strasbourg.

Europorte has signed a partnership with Alstom to bring productivity benefits and to reduce maintenance costs for its locomotive fleet.

Europorte and London Carex won the first “Award for Innovation” from the Railfreight Group in the UK, an association that aims to promote freight competition in the UK. The award was in recognition of the test with a high-speed train carrying parcels which was run from the airport in Lyon to the UK via Charles de Gaulle airport in Paris and the Channel Tunnel, and which demonstrated the speed and environmental gains that can be made transporting air freight containers by high speed rail.

In the UK, GB Railfreight continues to grow and won the 2012 Best Logistics Provider award at the McCloskey Coal Conference. GB Railfreight delivers 30% of all the coal transported by rail in the UK and is developing a strong biomass business.

Traffic for the first nine months (1 January to 30 September))

Truck Shuttle traffic grew significantly, by 17%, during the quarter, compared to the third quarter in 2011. The cross-Channel Short Straits market continued to grow by an estimated 2% for the first nine months of the year, but it still remains approximately 10% below the levels seen in 2007. In this context, Eurotunnel proved the value of its pricing policy based on the Tunnel’s key strengths.

Compared to the third quarter of 2011, car traffic increased substantially, by 10%, accompanied by an excellent quality of service. In an active summer market, Eurotunnel was able to offer customers an environmentally friendly transport service completely aligned with the “green” values of the Olympic and Paralympic Games in London. Due to the natural flexibility of its transport system, the group was easily able to adapt its Shuttle services to the increase in demand.

2,596,005 Eurostar passengers travelled through the Channel Tunnel during the third quarter, a reduction of -1% compared to the third quarter in 2011, although traffic remains 2% above the level over the first nine months of the previous year. Eurostar believes that during the period of the Olympic Games, tourists who were not going to the Games were encouraged to avoid London. It should also be noted that the number of departures during the quarter was below that of the same period in 2010.

During the third quarter, the number of rail freight trains travelling through the Channel Tunnel increased by 2%, due to a return to growth in the intermodal sector and to some specific steel traffic but the tonnage transported reduced by 9%. Over nine months the number of trains is 6% lower, in large part due to the constraints imposed by RFF (the French rail infrastructure manager) at Frethun, on each operator passing through the Tunnel.

At €221.6 million, revenue for the Fixed Link for the third quarter of 2012 has made a solid increase of 10%. Taking Europorte and the new maritime activity into account, the total revenue figure for Eurotunnel has reached €274.6 million, a substantial 13% increase.

Revenue for the Shuttles activity has increased by 16% to €142.1 million compared to the same period in the previous year.

This activity is entirely marginal for the third quarter of 2012, having been started from scratch only from 20 August 2012, 10 months after the end of Seafrance's operations. When Groupe Eurotunnel acquired the assets in July 2012, the ferries Berlioz and Rodin were immediately sent for servicing. However, despite the operational achievement in getting these two vessels into service in only six weeks, they did not obtain their seaworthiness certificates until 20 August, by which time they had lost any chance of capturing any of the summer traffic. The third ship (The Nord-Pas-de-Calais) in turn went for servicing in mid-October. On another front, the opinion of the French competition authorities, petitioned in June, should be known shortly.

The ferries are leased to an independent company (the Scop). MyFerryLink must compete against very lively competition from the two powerful operators P&O and DFDS, the latter having for the first time reached a market share of approximately 20%, as a result of its presence on several routes.

Although the Scop has not received from the administrators the monies which were planned for it during the liquidation of Seafrance, it has still honoured its first lease payment. Nevertheless, the blockage of these funds constitutes a threat to the viability for the SCOP. 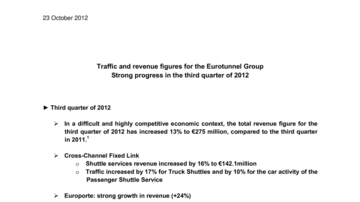 Traffic and revenue figures for the Eurotunnel Group