Eurotunnel, operator of the Channel Tunnel, today reported results for the third quarter of 2004.

"The third quarter results are obviously not satisfactory and confirm our July prognosis. These figures demonstrate that Eurotunnel’s previous strategy was not adjusted to market trends in terms of capacity and pricing.

“As we promised in our letter to shareholders on 7 July, we are completing a thorough review of the situation in both the market and the organisation of the Group. This review will form the basis of our three year plan that we will present to our Agent Banks at the end of October."

In a market which grew by 8%, Eurotunnel carried 4% fewer trucks during the quarter compared with the third quarter in 2003. The market has been boosted with the arrival of new hauliers from the eastern European countries that recently joined the European Union and are now able to run pan-European cabotage services (transport of goods in one country by a haulier from another country). The speed of service offered by Eurotunnel is of less importance to these new long-distance hauliers than to our more traditional customers.

Over-capacity, combined with intense price competition, has also contributed to the fall in Eurotunnel’s market share, which was 38% for the quarter.

During the third quarter, the Short Straits car market contracted further (down 1%) with a significant reduction in day trips and short breaks. This fall in traffic was exacerbated for Eurotunnel (down 5%) due to Eurotunnel’s greater sensitivity to changes in these sectors of the market.

In addition, a new operator (SpeedFerries) entered the market in May 2004 with aggressive summer-season pricing. Eurotunnel responded with a series of promotional offers which limited the effect of this on long-stay holiday traffic, although it meant that revenue was below that for the same quarter last year.

The number of coaches carried by Eurotunnel fell by 13% in a market down 4%.

Revenue from Shuttle Services was £77.7 million, a fall of 8% at constant exchange rates, which reflected a fall in revenue in both truck and passenger activities due to strong competition and pressure to reduce prices.

Revenue from the Railways, which includes payments under the Minimum Usage Charge provisions, increased by 2% to £58.8 million.

The Channel Tunnel is also used by other rail services not operated by Eurotunnel: Eurostar for high-speed passenger services between London/Paris and London/Brussels, and EWS and SNCF for international rail freight services.

The overall level of Railways traffic using the Tunnel currently has no impact on Eurotunnel’s income owing to the Minimum Usage Charge provisions which will apply until November 2006.

*The passenger numbers given are for Eurostar passengers who travelled through the Channel Tunnel, and exclude passengers between Paris/Calais and Brussels/Lille. 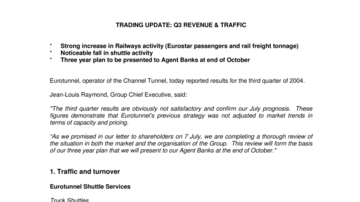