Eurotunnel, operator of the Channel Tunnel, today reported revenue and traffic figures for the year-ended 31 December 2004.

“The cross-Channel market has remained difficult for all operators, as it has for Eurotunnel.

“The improvement in Eurostar traffic over the last year has certainly been encouraging, but competitive pressure remains strong and the impact on the market of the development of ‘no-frills’ airlines is being felt ever more strongly.

“Making sure that Eurotunnel remains competitive in the future has required a radical change in commercial policy.

“This is why a new commercial strategy has been in place in the Truck business since 1 January 2005.It reinforces the Eurotunnel shuttles’ specific strengths to the market: speed, frequency and reliability.The new Passenger strategy will be launched in time for the summer.

“At the same time, the policy of controlling costs continues to bear fruit.

“By combining these initiatives, Eurotunnel has given itself the means to stabilise revenues and to restore margins.”

Overall, the Short Straits truck market returned to growth in 2004. Eurotunnel carried 1,281,207 trucks in 2004, a similar result with that achieved in 2003. Eurotunnel did not benefit from the growth in the market stimulated, predominantly, by increased trade from the former Eastern bloc countries following their accession to the EU in May 2004, and by the continuing shift from trucks to containerised units which benefits the northern part of the overall UK-Continental market. The benefits of a faster crossing via the Channel Tunnel make less impact on such long-distance logistics chains.

The Short Straits coach market fell by 4% in 2004 as scheduled cross-Channel coach services continued to contract. Eurotunnel’s greater dependence on the scheduled coach market together with continued expansion from ‘no-frills’ airlines resulted in a 12% fall in volume to 63,467 coaches in 2004.

The Channel Tunnel is also used by rail services not managed by Eurotunnel – Eurostar for high-speed passenger-only services on London/Paris and London/Brussels, and EWS and SNCF for international rail freight services.

The number of passengers carried through the Channel Tunnel by Eurostar rose by 15% in 2004 to 7,276,675 passengers (excludes domestic passengers between Paris/Calais and Brussels/Lille.)

Revenues from Eurostar and rail freight services through the Tunnel are protected by the Minimum Usage Charge (MUC) paid to Eurotunnel by the Railways. Despite these increases, traffic from the Railways remains significantly below levels required to exceed MUC payments. Consequently, the revenue increase in this sector was only 2% to £234 million. Payments under the MUC continue until the end of November 2006.

Revenue of £19 million from non-transport activities was 23% lower than in 2003 due to lower revenues from telecoms, land sales and retail. 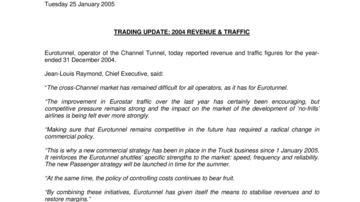