Eurotunnel, operator of the Channel Tunnel, today announced its revenue and traffic for the first quarter of 2005.

The total operating revenue for the period, including revenues from transport and non transport activities, is £130.8 million. This represents an increase of 2% compared to the first quarter of 2004, at constant exchange rates.

Shuttle revenues increased by 7%, at constant exchange rates compared to the first quarter of 2004, in a period of favourable market conditions.

Railway revenues increased 1% to £58.7 million. This includes payments due under the Minimum Usage Charge (“MUC”) arrangements amounting to £20.4million in the first quarter.

The revenue from non transport activities remains marginal. The reduction of £1.9 million is due largely to the absence of non recurrent revenues (land sales in first quarter 2004) in the first quarter of 2005.

Eurotunnel carried 345,570 trucks in the first quarter of 2005, an increase of 6% compared to 2004. The increase in traffic follows the introduction of the new freight strategy at the start of the year. Eurotunnel also benefited from the widespread disruption to ferry services throughout the first quarter due to a combination of severe weather, reduced berthing capacity at the port of Calais, and continuing industrial action by French seafarers. Average yields were higher in 2005 also contributing to the increase in revenue.

Eurotunnel carried 438,804 cars, an increase of 4% compared to 2004. Eurotunnel has pursued a policy of product differentiation for its Passenger car services and has improved the product mix, increasing short break and long stay activity.

The Passenger car market has been erratic during the first quarter of 2005 due to the uncertainty of ferry services and disruptions at the port of Calais. The ferry companies have engaged in further price wars to gain market share. Despite this Eurotunnel has improved volumes during this time.

Eurotunnel carried 17,629 coaches, an increase of 49%. Coach traffic diverted from the port of Calais due to the uncertainty surrounding the regularity of ferry services.

The Channel Tunnel is also used by rail services not managed by Eurotunnel: Eurostar for high-speed passenger-only services on London/Paris and London/Brussels, and EWS and SNCF for international rail freight services. 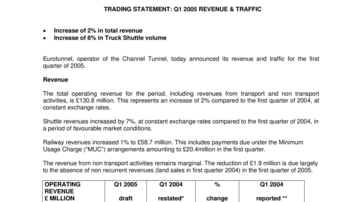