“The Group’s strategy to concentrate on leadership in the most dynamic and high contribution sectors of the market, both for freight and passenger services, has enabled us to record a further increase in revenues. We remain confident for the full year”.

Le Shuttle set a new passenger vehicle record for the summer period between 17 July and 3 September, carrying 563,750 cars, an increase of 2% compared to 2016.

Investments in premium service, like the new Flexiplus lounge in France which opened on 15 July, bore fruit with a 6% increase in bookings for this unique product during summer period. Revenue from Shuttle services increased by 4% compared to the same period in the previous year to €179.3 million, reflecting growth in both traffic and yield.

Revenues from use of the Railway Network increased by 2% in the third quarter, principally as a result of an increase in the number of Eurostar passengers.

B.  Rail freight operators: Europorte and its subsidiaries

Revenues from Europorte amounted to €29 million, up 3%.

Traffic for the third quarter (1 July to 30 September) Traffic for the first nine months (1 January to 30 September) Passenger Shuttles: Car traffic has remained relatively stable over the first nine months of the year, despite the context. Market share for cars on the Short Straits for nine month increased to 54.1%. The focus on added value services, such as the new Flexiplus lounge has enabled us to respond to the flows of British customers who prefer the Continent as their holiday destination, as can be seen in the new record set for the period from 17 July to 3 September.

Truck Shuttles: Truck Shuttle traffic has remained stable over the first nine months of 2017, compared to the same period in 2016, even though it was severely disrupted at the start of the year by the weather conditions in southern Europe. The reinforced controls put in place by Eurotunnel, combined with the frequency of departures are important decision factors for customers when they choose to travel with Le Shuttle Freight. Truck market share was 39.1% for the first nine months of 2017.

B. The Railway Network

High-speed trains: 2,691,951 passengers travelled through the Channel Tunnel on Eurostar trains in the third quarter of 2017, an increase of 4% compared to the same period in 2016 and an increase of 2% for the first nine months of the year. This increase was mainly driven by overseas visitors (from markets outside Europe) and business travellers.

On the strength of renewed contracts with major customers, Europorte France has continued with its commercial policy based on quality of service.

With record volumes despite the uncertain European context, the business remains positive. The Group confirms its published objectives. 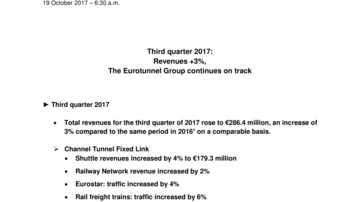