“The Group is well placed for the sustained period of growth in the UK economy forecast by the IMF and the Bank of England. At the same time, the fall in the value of the pound has had a significant positive impact on the service of our debt. These encouraging signs, combined with new records broken this quarter for the Group put into perspective the change in public opinion following the vote in favour of Brexit: our business has never been stronger”.

Le Shuttle achieved a new record for the month of July, carrying 317,424 cars, beating the previous record which was set in 1998 and which benefitted from the football World Cup in France that year, proof that the leisure and tourism segments remain buoyant.

The Passenger Shuttles achieved their best third quarter since 1998 and beat the record set in 1999 for the first nine months of the year for a comparable period and did so despite a fragile environment: further proof of the resilience of our services.

The Truck Shuttles maintained their progress and beat all previous records set for comparable periods.

The growth in Shuttle revenues has also benefitted from an increase in yield.

At the end of September, Eurotunnel inaugurated the GSM-R communications system in the Tunnel and on the terminals. With GSM-R, Eurotunnel is an actor in the development of European railway traffic. A new era is beginning for the Tunnel Concessionaire, as much in terms of railway safety as in terms of customer service.

A slight drop in revenues for Europorte in France, linked to the decline in the transport of cereals in the summer of 2016.

The increase in carbon tax in the UK brought about a reduction in the transport of coal for GB Railfreight (GBRf), as was already the case for the first part of the year.

The Group has announced that it is in exclusive discussions with a view to the potential sale of GBRf.

In the course of the third quarter, ElecLink began construction work on the project with Siemens and Balfour Beatty.

The two institutions to have issued forecasts for the UK economy, the Bank of England and the IMF, have confirmed that they forecast growth for the country, of 1.1% and 0.8% respectively for 2017.

Total revenues for the Group, excluding MyFerryLink, grew by 4% at a constant exchange rate compared to 2015, to €320.3 million. Revenue from Shuttle services increased by 12% compared to the same period in the previous year to €178.6 million, reflecting growth in both traffic and yield.

Revenues from use of the Railway Network decreased by 5% in the third quarter, principally as a result of a decline in the number of Eurostar passengers linked to the weakening of the leisure segment following the terrorist attacks.

B.  Rail Freight Operators: Europorte and its subsidiaries

For the first nine months of the year, up to the end of September 2016, revenues for the Eurotunnel Group reached €902.1 million (+3%) excluding MyFerryLink.

Revenues from Shuttle Services grew by 10% to €467.3 million

Traffic for the third quarter (1 July to 30 September) Traffic for the first nine months (1st January to 30 September) Passenger Shuttles: Car traffic continued its growth and increased by 1% over the first nine months of the year. The third quarter Short Straits car market decreased by -0.7% over the period, whilst the volume transported by Eurotunnel Le Shuttle has increased by 2%. The Group has been able to provide services adapted to the needs of passengers looking for an environmentally friendly means of transport and for the flows of British tourists who favour the Continent as their holiday destination of choice, which has led to the record set in July and an increase in market share of 1.4 points to 49.8% for the third quarter.

High-speed trains: 2,577,405 passengers travelled through the Channel Tunnel on board Eurostar trains during the third quarter, a reduction of 10% compared to the third quarter in 2015 and of 5% for the first nine months of the year. This reduction is a result of the climate created by the terrorist attacks in Paris and Brussels. Nonetheless, the new services to Lyon and Marseille are seeing real success and the progressive roll out of the new e320 trains will encourage growth in this traffic.

Cross-Channel Rail Freight: for the first nine months of the year, the number of freight trains passing through the Tunnel was down 33% to 1,327 trains linked to the strong migrant pressure in the second half of 2015 which forced some customers to change route. The number of rail freight trains using the Tunnel was stable in the third quarter with a change in trend at the end of the summer period and increases observable in the months of August (+11%) and September (+30%) compared to the same period last year.

This quarter, GBRf benefitted, in addition to the Caledonian Sleeper activity launched in April 2015, from the increase to full capacity of the new 5 year contract signed with Network Rail in 2014.

Europorte France has begun negotiations with its unions with a view to signing a collective agreement on working time which will take account of the railway reform package enacted in France in June 2016.

Activity remains positive, with record volumes achieved despite an uncertain European context. There is no sign of slowdown in the UK economy, the FTSE has grown over 10% since the referendum. Variations in the value of sterling have had no significant impact on our business in the past and the movement in exchange rates does not damage growth in profitability. 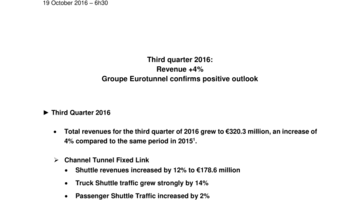