The Eurotunnel Group: New Traffic Records set, Revenues up by 4% in First Quarter of 2016

“In the first quarter of 2016, the Eurotunnel Group has once again demonstrated its capacity to generate growth no matter what the macro-economic environment or the value of the pound. We confirm our confidence in achieving our 2020 strategic plan”.

Best first quarter for Le Shuttle for 15 years, with more than half a million cars transported between 1 January and 31 March 2016. Market share increased.

Best quarter ever for the Truck Shuttle service, which carried more than 400,000 trucks for the first time since services began, with 410,729 trucks transported, 6% above the previous record (388,214 trucks transported in the 4thquarter of 2014), and increased market share.

Growth in Shuttle revenues also benefited from an increase in yield.

Despite the terrorist attacks in Brussels in March and strikes in Belgium in January and in France at the beginning of March, Eurostar traffic which decreased by -3% shows signs in the first quarter of 2016 of improvement over the last quarter of 2015.

Renewal, after tender, of Europorte contracts with the major sea ports of Nantes-Saint-Nazaire and La Rochelle. Europorte, through its subsidiary Socorail, will control the management, operations and maintenance of port railway infrastructure for a further 5 years.

Start of new 5 year contract for GB Railfreight in the UK to transport biomass for Drax. Delivery of seven new class 66 locomotives to GB Railfreight.

Preparatory works for the launch of the construction project. At €207.3 million, revenues for the Fixed Link show an increase of 6% in the first quarter of 2016. Including Europorte, the consolidated revenue for the Eurotunnel Group reached €279.9 million, an increase of 4% at a constant exchange rate.

Shuttle Services revenues increased by 13% to €135.5 million compared to the same period in the previous year with an increase both traffic and in yield.

Revenue from the Railway Network decreased slightly as a result not only of the attacks in Paris in mid-November and Brussels in March, but also as a result of the strikes which paralysed the Belgian and French networks respectively in January and March.

B.  Rail Freight Operators: Europorte and its subsidiaries

In France, Europorte experienced a slight slowdown in the rate of increase of its revenues due to difficulties encountered with obtaining paths from SNCF Réseau for the development of its customers’ car transportation services.

GB Railfreight benefited from the impact of new contracts which started in 2015 (Caledonian Sleeper) and the start of 2016 (Drax biomass), which have enabled it to compensate for the reduction in coal transport linked to the increase in Carbon Tax in the UK in 2015.

Truck Shuttles: with the continued growth in the UK economy and the inauguration of the new terminal for trucks at Folkestone, the Truck Shuttle service has seen strong growth (+10%) and is significantly outperforming the cross-Channel market which grew by 1.5% in the first quarter of 2016. In a highly competitive environment, Eurotunnel has confirmed its place as leader in the market with 40.5% market share in the first quarter and continues the trend established with the strong performance in the last quarter of 2015.

Passenger Shuttle: traffic exceeded 500,000 cars (+8%) and outperformed the market which grew by 3.6% in the first quarter. Le Shuttle car market share grew to 60.3% in the first quarter of 2016. Traffic records were beaten at the beginning of the year and then on Good Friday and over the Easter weekend.

Cross-Channel Rail Freight, which was the traffic most affected by the migrant crisis as a result of the difficulties experienced in securing the SNCF yard at Calais-Fréthun, lost half of its customers and services to other routes during the autumn of 2015. In the first quarter of 2016, it therefore carried 44% less traffic than the previous year. Eurotunnel is working with the other parties concerned to re-launch traffic now that the tracks are once again secure. 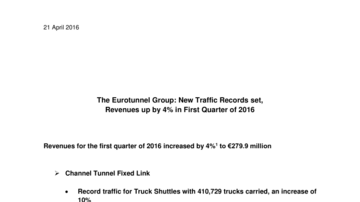 The Eurotunnel Group: New Traffic Records set, Revenues up by 4% in First Quarter of 2016