The Eurotunnel Group: Further increase in revenues during the first quarter of 2017

"In the first quarter of 2017, the Eurotunnel Group has once again shown proof of its ability to generate growth. We reconfirm our confidence in our ability to reach our strategic plan for 2020".

The month of March was an all-time record for Le Shuttle Freight with more than 150,000 vehicles transported, an increase of +5% compared to March 2016, the previous record month.

Passenger traffic suffered from an unfavourable calendar effect which this year saw the Easter weekend, a strong driver for tourist traffic, fall in the month of April whilst in 2016 it fell in March.

With a market share for cars2 of 62.4% in the Short Straits market in the first quarter of 2017, Le Shuttle recorded its best results since opening in 1994.

The ceremony to lay the foundation stone for the new electrical interconnector between the UK and France was attended by UK Minister for Industry and Energy, Jesse Norman. At €202.9 million, revenues for the Fixed Link recorded an increase of 1% in the first quarter of 2017. Taking into account Europorte, the consolidated revenue for the Eurotunnel Group reached €231.8 million, an increase of 1% at a constant exchange rate.

Revenues for Shuttle Services were stable at €130.8 million compared to the same period in 2016 due to an increase in truck yield.

Revenues from the Railway Network grew by 4%, a sign of a return to normality for the Eurostar leisure segment, a trend which should continue in the month of April, with the record levels of reservations recorded by Eurostar for the Easter weekend.

In France, Europorte saw a slight reduction in its revenues linked to the crisis in the cereals sector which had a significant effect on traction and transport commissioning in the sector.

Truck Shuttles: despite the unusually severe winter in the south of Europe, which penalised fresh fruit and vegetable exports, truck traffic remained stable over the first quarter of 2017. In a highly competitive context, with the return to normal operations for the port of Calais, Eurotunnel confirmed its place as leader in the market with a 38.9% market share in the first quarter of 2017 and continues its established progress.

Passenger Shuttles: car traffic, which was down by 7% to 466,562 vehicles carried, was penalised by the strongly unfavourable calendar effect with the Easter weekend, which generates high levels of tourist traffic, falling in April this year whilst in 2016 it fell in March. Le Shuttle car market share grew to 62.4% in the first quarter of 2017, following a record in February of over 64%.

High-speed trains: Eurostar recorded 2.27 million passengers, an increase of 2%, a positive sign of a return of traffic which is expected to continue during the second quarter, especially given the record level of reservations for travel over the Easter weekend.

Cross-Channel rail freight continued the trend observed towards the end of 2016 and recorded strong growth in the first quarter of 2017 of +23% compared to the previous year, proof that the efforts made by Eurotunnel and other parties to generate growth in the sector are bearing fruit.

1 All comparisons with 2016 are made at the exchange rate of £1=€1.168 and after restatement in accordance with IFRS 5 following the sale of GB Railfreight. 2017 revenues are unaudited. 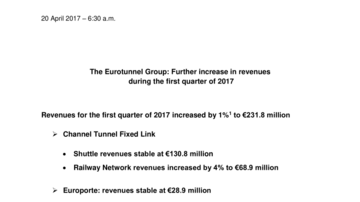 The Eurotunnel Group: Further increase in revenues during the first quarter of 2017