Summer 2015 has seen Eurotunnel break new traffic records for its Le Shuttle Passenger service. Traffic in July and August reached new highs compared to 2014, which was itself a record year. Almost 658,000 vehicles1 travelled with Eurotunnel during the period.

Two other records were broken during the British summer holiday returns: on 15 August 2015, more than 17,000 vehicles2 travelled via Le Shuttle, making it the highest daily traffic in the history of the Tunnel; and finally, the last weekend of August, between the 29 th and 31st, was also the best weekend in 21 years of operations. During the peak periods on these days, more than 1,000 vehicles per hour were being loaded and transported by Eurotunnel teams.

“I am grateful to our ever increasing numbers of loyal customers. These traffic figures demonstrate the vital role the Channel Tunnel plays in the European transport ecosystem." 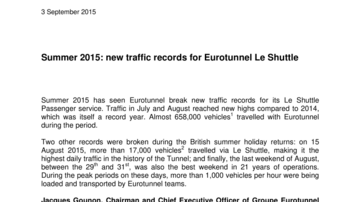