In September 2020, Le Shuttle Freight carried 131,985 trucks, up 2% compared to September 2019, a strong performance thanks to the unrivalled nature of its service. Since 1st January 2020, more than 1.03 million trucks have crossed the Channel on our Shuttles.

In September 2020, Le Shuttle transported 127,623 passenger vehicles despite the end of the summer period being impacted by the re-imposition from 15 August of quarantine measures for travellers coming from several countries including France, which resulted in early returns as well as travel postponements. However, the strong level of traffic compared to our competitors is explained by the competitive advantage of Le Shuttles, especially in terms of health, which offers a contactless journey from start to finish. Since the beginning of the year, more than 1.18 million tourist vehicles have crossed the Channel on our Shuttles.

The Group’s traffic and revenue for the third quarter will be published on Monday 19 October before the markets open.

October traffic figures will be published on Thursday 5 November before the markets open. 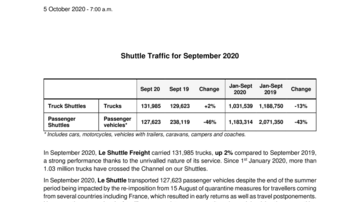