In September 2019, Passenger Shuttles carried 238,119 vehicles, down slightly by 1% from September 2018 which is a strong performance given that 2018 was the best month of September since 1999. Since 1 January 2019, almost 2.1 million passenger vehicles have crossed the Channel with Le Shuttle, down 2% due to the delay and uncertainty around Brexit even though border controls will not be changed.

Truck traffic in September 2019 is down 7% compared to September 2018, mainly due to a slowdown in UK consumption and in the German economy. Since the beginning of the year, almost 1.2 million trucks have crossed the Channel on Le Shuttle Freight services.

The Group’s traffic and revenue for the third quarter will be published on Wednesday 23 October before the markets open.

October traffic figures will be published on Thursday 14 November before the markets open. 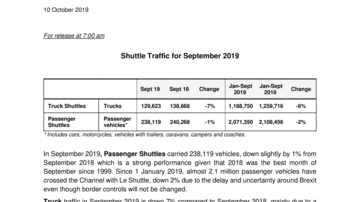