Best ever third quarter for Le Shuttle Freight thanks to another strong month, with the record level of September 2017 being equalled in September 2018 with almost 139,000 trucks transported.

Since 1 January, almost 1.26 million trucks have crossed the Channel with Le Shuttle Freight.

Best September for Le Shuttle since 1999 with 240,268 passenger vehicles transported despite an unfavourable calendar effect with the returns of the summer season being in August this year. Since the start of January 2018, more than 2.1 million passenger vehicles have crossed with Le Shuttle.

The Group’s third quarter revenues will be published on Tuesday 23 October 2018 at 6:30.

Traffic figures for the month of October will be published on Tuesday 13 November 2018 prior to the opening of trading. 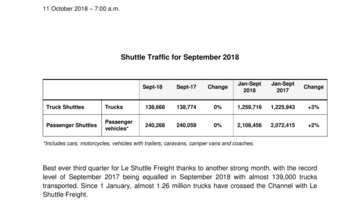