In October 2019, Le Shuttle Freight traffic benefited from stock piling effect for a possible Brexit on 31 October and set a new all-time traffic record with 153,600 trucks transported, above October 2018 by 1% and beating the previous record (March 2019). Since the beginning of the year, more than 1.3 million trucks have crossed the Channel aboard Le Shuttle Freight.

In October 2019, Passenger Shuttles carried 205,371 passenger vehicles, up 1% compared to October 2018 making this the best month of October since 2003 due to a favourable calendar effect related to the half-term holidays. Since 1 January 2019, nearly 2.3 million passenger vehicles have crossed the Channel with Le Shuttle.

Traffic figures for the month of November will be published on Thursday 12 December 2019 prior to the opening of trading. 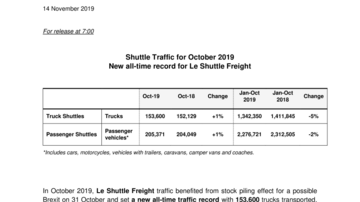