It is the third best month after October 2018 and March 2017, both of which include an additional day. Since 1st January, more than 1.5 million trucks have crossed the Channel with Le Shuttle Freight.

Best month of November since 2013 for Passenger Shuttle traffic with 163,621 vehicles transported. Since 1st of January, more than 2.4 million passenger vehicles have crossed onboard Le Shuttle.

Traffic figures for the month of December will be published on Thursday 10 January 2019 prior to the opening of trading. 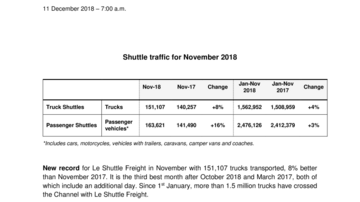