In November 2017, Le Shuttle Freight transported 140,257 trucks, a slight decrease of 2% compared to November 2016. The capacity offered was reduced due to an intensification of maintenance operations at the beginning of the month. Since 1 January 2017, 1,508,959 trucks have crossed the Channel with Le Shuttle Freight.

Passenger vehicle traffic decreased by 6% in November compared to the same month in 2016, with 141,490 vehicles transported, having been similarly penalised by the intensification of maintenance operations. Since 1 January 2017, 2,412,379 vehicles have crossed the Channel with Le Shuttle.

The traffic figures for December 2017 will be published on Thursday 11 January 2018, before market opening. 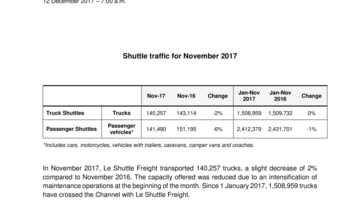