Shuttle Traffic for May 2019

The delay to Brexit due to the political uncertainty in the UK seems to be affecting economic activity, as shown by macroeconomic indicators and a contraction in industrial production.

Truck traffic in May 2019 is down 11% compared to May 2018 following destocking by British businesses in April and May, following stock building in the first three months of the year in preparation for the original departure date from the EU on the 29th March. However, after a sharp decline in car production in Britain in April, the recovery of traffic flows related to this industry is progressively improving. Since the beginning of 2019, nearly 690,000 trucks have crossed the Channel on Le Shuttle Freight services, a 2% decrease on last year.

In May 2019, Passenger Shuttles transported 213,613 tourist vehicles, down 7% on May 2018. This is the result of later Easter holidays in April in 2019, leading to a contraction in demand during May. Since 1 January 2019, more than 930,000 passenger vehicles have crossed the Channel with Le Shuttle.

The publication of June monthly figures will be on Thursday 11 July 2019 before markets open. 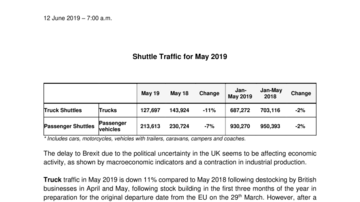 Shuttle Traffic for May 2019