Shuttle Traffic for May 2017

In May 2017 Le Shuttle Freight transported 141,646 trucks, recording the best Truck Shuttle traffic for a month of May in its history, an increase of 3% compared to May 2016.

On Thursday 8 June 2017, Le Shuttle Freight established a new daily record with 3,822 trucks transported in 24 hours in the CAFO (Calais-Folkestone) direction, beating the previous record of 3,633 trucks set on 3 December 2015.

Since the start of the year, truck traffic has fallen slightly by 1%, due to the exceptional weather conditions in Spain at the beginning of the year.

The figures for the month of June will be published on Tuesday 11 July 2017 prior to the opening of trading. 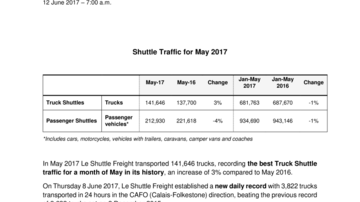 Shuttle Traffic for May 2017