In March 2019, Le Shuttle Passenger transported 174,767 passenger vehicles, a decrease of 4% compared to March 2018, due to the unfavourable calendar effect of the Easter weekend, including Good Friday, being in the month of April unlike last year. Since the start of January, nearly 490,000 passenger vehicles have crossed the Channel with Le Shuttle.

The national work to rule by French customs officials, since 4 March, has resulted in an estimated loss of 110,000 Eurostar passengers alongside several thousand trucks and passenger vehicles travelling from France to Great Britain via Le Shuttle. Despite this, Le Shuttle Freight recorded a new best ever month.

Traffic and revenues of the Group for the first quarter will be published on Thursday, 18 April, before the AGM and prior to the opening of trading.

Traffic figures for the month of April will be published on Tuesday 14 May 2019 prior to the opening of trading. 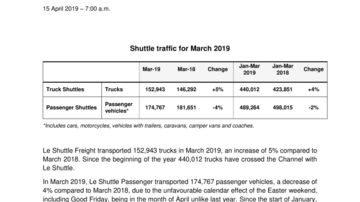