With 142,016 trucks transported in June 2018, Le Shuttle Freight recorded the best June in its history, beating the previous record established in June 2016.

Eurotunnel Le Shuttle Freight has achieved a historic half-year establishing a new record with more than 845,000 trucks transported since 1 January.

The Group’s half-year results will be published on Wednesday 25 July 2018 prior to the opening of trading.

Traffic figures for the month of July will be published on Thursday 9 August 2018 prior to the opening of trading. 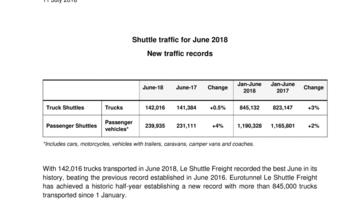