With 144,990 trucks transported in July 2018, Le Shuttle Freight recorded the best July in its history, and the third-best traffic ever just after March 2018 and March 2017.

Since 1 January, nearly a million trucks have crossed the Channel onboard Le Shuttle Freight.

Le Shuttle passenger traffic in July increased 3% compared to July 2017 with 314,955 passenger vehicles transported. this is the second-best traffic for a month of July (after July 2016) since the ending of Duty Free in 1999. Since the start of January 2018, more than 1.5 million passenger vehicles have crossed with Le Shuttle.

Traffic figures for the month of August will be published on Tuesday 11 September 2018 prior to the opening of trading. 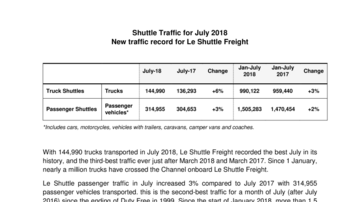