Passenger vehicle traffic was 5% lower compared to the month of July 2016, with 304,653 vehicles transported, penalised by the double impact of the final stages of the Euro 2016 Football Championship and the biennial Le Mans Classic both taking place in France in July last year. Since 1 January 2017, Le Shuttle Passenger traffic has decreased slightly with 1,470,454 vehicles transported.

The traffic figures for August 2017 will be published on Wednesday 13 September 2017, before markets open. 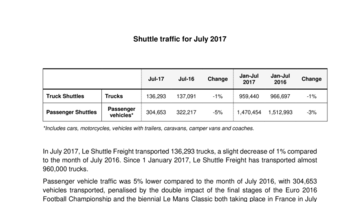