The Eurotunnel Group ‘s revenues for the year 2016 will be published on Tuesday 24 January 2017 prior to the opening of trading.

The traffic figures for the month of January will be published on Monday 13 February 2017 prior to the opening of trading. 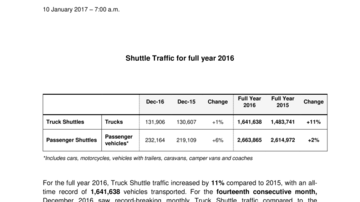