In February 2018, with 133,287 trucks transported, Le Shuttle Freight had the second best ever month of February since opening, an increase of +5% compared to February 2017, despite the particularly poor weather conditions in the final week which had an impact on traffic across a large part of Europe.

Since the first of January, traffic has increased by +7%, with 277,599 trucks transported.

Passenger traffic was slightly lower compared to the month of February 2017, with 164,296 vehicles, penalised by weather conditions which were not very conducive to tourism. The

Flexiplus service hit a traffic record on 17 February, carrying 1,999 vehicles, more than 20% of the passenger traffic carried that day. Since the first of January, more than 316,000 vehicles have travelled with Le Shuttle.

The traffic figures for the month of March will be published on Wednesday 11 April 2018 prior to the opening of trading. 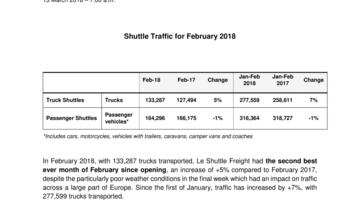