Full year traffic and consolidated revenue for the Group will be published on Thursday 26 January 2023 before the markets open.

Traffic figures for the month of January will be published on Thursday 9 February 2023 before the markets open.

Getlink SE (Euronext Paris: GET) is, through its subsidiary Eurotunnel, the concession holder for the infrastructure of the Channel Tunnel until 2086. Eurotunnel operates Truck and Passenger Shuttle services (cars and coaches) between Folkestone (UK) and Calais (France). It provides the fastest, most reliable, easiest and most environmentally friendly way across the English Channel. Since its opening in 1994, more than 476 million people and 98 million vehicles have travelled through the Channel Tunnel. Carrying 25% of UK-EU trade, this unique land connection has become a vital link between the Continent and the United Kingdom. This performance is reinforced by ElecLink, the new electrical interconnector installed inside the Tunnel. Getlink’s sustainable mobility services offering is completed by its rail freight subsidiary, Europorte, which offers a wide range of integrated rail services. Committed to "low-carbon" services and reduced environmental impact (the Group prevents the equivalent of 2 million tonnes of CO2 emission per year through its activities), Getlink puts people, nature and territories at the heart of its concerns. 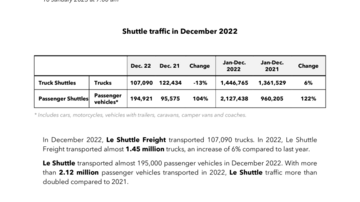