In December 2020, Le Shuttle Freight traffic was above pre-COVID levels with 131,746 trucks carried. This strong performance, up 8% compared to December 2019, benefitted from the stockpiling effect due to the end of the transition period on 31 December 2020, and was achieved despite testing measures imposed by France on 20 December 2020 for all people travelling from the United Kingdom. Le Shuttle Freight transported a record weekly traffic level in the second week of December with more than 40,000 trucks travelling. In 2020, since border closures and the successive lockdowns during which the industrial sector was almost at a standstill across Europe due to the pandemic, freight traffic has remained strong.

In December 2020, Le Shuttle transported 86,676 tourist vehicles and continued to be strongly impacted by travel restrictions put in place in France, in certain regions of the United Kingdom and in some other European countries, as well as the testing measures for everyone arriving in France from the United Kingdom. However, the level of traffic in 2020 remains higher than that of our competitors thanks to the competitive advantage of Le Shuttle, especially in terms of speed, reliability and health, offering a contactless journey from start to finish. Since the beginning of 2020, more than 1.4 million tourist vehicles have crossed the Channel on our Shuttles.

Full year revenue and traffic for the Group will be published on Thursday 21 January 2021 before markets open.

January traffic figures will be published on Friday 5 February 2021 before the markets open. 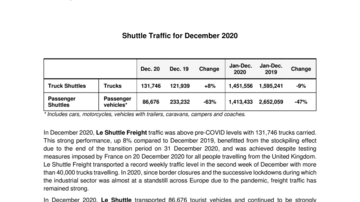