In total for 2017, more than 1.637 million trucks have crossed the Channel with Le Shuttle Freight.

Passenger vehicle traffic increased by 1% in December compared to the same month in 2016, with 234,097 vehicles transported. Since 1 January 2017, 2,646,476 passenger vehicles have crossed the Channel with Le Shuttle.

The Group’s revenues for the year 2017 will be published on Thursday 25 January 2018 prior to the opening of trading.

The traffic figures for the month of January will be published on Monday 12 February 2018 prior to the opening of trading. 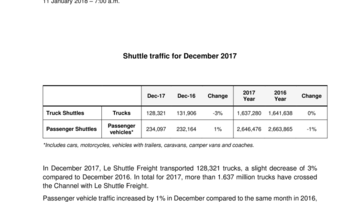