In August 2019, Passenger Shuttles transported 373,084 passenger vehicles, up 3% compared to August 2018. This traffic was particularly strong at the end of the month, the last week of August representing a record with 86,904 vehicles transported. Since 1 January 2019, more than 1,8 million vehicles have crossed the Channel with Le Shuttle.

Truck traffic in August 2019 is down 9% compared to August 2018, mainly due to the lack of recovery in the automotive market, and a slowdown in UK consumption. Since the beginning of the year, 1,059,127 trucks have crossed the Channel on Le Shuttle Freight services (down 6%).

September traffic figures will be published on Thursday 10 October before the markets open. 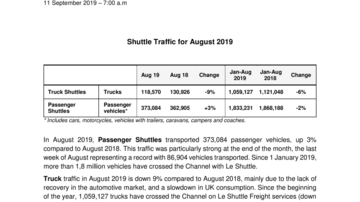