In August 2018, Le Shuttle Freight is pursuing its path and recorded the best August in its history with 130,926 trucks transported, establishing the fourth consecutive monthly traffic record.

Since 1 January, 1.1 million trucks have crossed the Channel onboard Le Shuttle Freight.

Traffic figures for the month of September will be published on Thursday 11 October 2018 prior to the opening of trading. 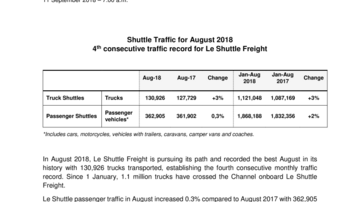