Shuttle Traffic for April 2019 - Destocking following a delay to Brexit

As anticipated, April 2019 saw a reduction in truck traffic (-12% compared to April 2018) following the high levels of inventory built by British businesses during the first three months of the year, in the lead up to an expected Brexit date of 29 March.

The stockpiling seen in January, February and March has been compensated by the reduction of stock levels for non-perishable goods in April. At the same time, several car plants brought forward their annual shutdowns, normally held in August, to April, again limiting the associated delivery requirements. This “unique seasonality” was also compounded by the impact of striking French customs officers.

Despite this, Eurotunnel’s Freight Shuttles have carried nearly 560,000 trucks since the start of 2019, a new record for the first four months of the year.

In April 2019 Eurotunnel’s Passenger Shuttles saw a 3% increase in traffic compared to the same month last year, carrying 227,393 vehicles, buoyed by a favourable calendar effect which saw the Easter weekend fall in April 2019 compared to March last year. Since 1 January 2019, almost 717,000 passenger vehicles have crossed the Channel by Shuttle.

The publication of May monthly figures will be on Wednesday 12 June before markets open. 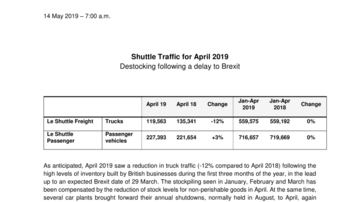 Shuttle Traffic for April 2019 - Destocking following a delay to Brexit