49 extra Shuttle crossings to transport tens of thousands of supporters

Eurotunnel welcomes the opening of the sixth Rugby World Cup in France tomorrow and is looking forward to a great tournament for all the supporters who will be present in the stadia until 20 October.

The participation of three British teams (England, Wales and Scotland) in this challenge, which will take place in Lens, St Denis, Paris and seven other French towns*, brings a fantastic opportunity to Eurotunnel.

Starting on 8 September, the day that England enter the fray against the USA (Stade Felix - Bollaert in Lens), Eurotunnel will carry 1100 more cars across the Channel than on a normal Saturday at this time of year. As another example, on 14 September, 1500 additional vehicles will join the normal traffic just a few hours before the match between England and South Africa at the Stade de France in St Denis near Paris.

For some matches, sales of tickets for Eurotunnel’s Passenger Shuttles, which carry cars and coaches, have leapt by more than 60%. To prepare for this increase in volume, which shows how well Eurotunnel’s service qualities - Speed Ease and Reliability - are regarded by cross-Channel travellers, the company has reorganised its September timetable to include 49 extra Shuttle departures.

“Our challenge is to keep on finding better ways to serve our customers – every day. This is an exceptional event and we will put in place exceptional service: by making the Channel crossing easier, we can help the supporters concentrate on their passion – The Rugby World Cup.” 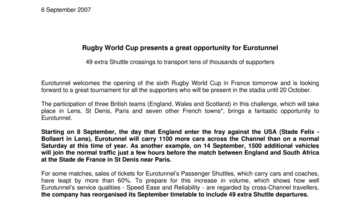