Eurotunnel saw a significant increase in summer holiday traffic this year, with the number of cars* carried on Passenger Shuttles between 01 July and 31 August up by 17% compared to the same time last year. The Passenger Shuttle service, which crosses the Channel in 35 minutes between Folkestone in Kent and Coquelles in the Pas-de-Calais, carried 533,238 cars during the period.

On August 14, Eurotunnel’s Shuttle Service broke the previous record for the number of passenger vehicles carried in one day, with 14,975 (14,825 cars and 150 coaches) travelling through the Tunnel in both ways. This is higher than the levels recorded in 1999, when traffic was buoyed by duty free sales.

This growth has seen a number of historic daily records broken, notably 9,382 vehicles (including coaches) travelled from Folkestone to Coquelles in 24 hours on 23 July, the start of the summer getaway. In the other direction (France-England), a new record was set on 29 August, with 8,869 vehicles coming back home.

On 21 July, Eurotunnel celebrated the crossing of the 250 millionth passenger transported through the Tunnel, since services commenced in 1994, the equivalent of four times the population of either of the two countries linked by the Tunnel.

The success is largely down to the considerable flexibility of Eurotunnel’s operations: the operations staff managed departures every ten to fifteen minutes at peak times. “Le Shuttle” is also recognised by its customers for its speed, reliability and quality of service.

“The intense activity through the summer shows that “Le Shuttle” is the perfect answer to our customers expectations: it is value for money and respectful of the environment. Our whole commercial strategy is aimed at increasing our traffic and our performance this summer is an incentive to continue in the same vein". 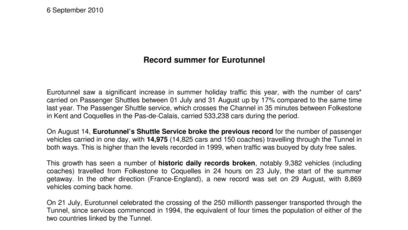