➢ Europorte: strong operational performance with revenue up by 3% to €32.2 million

➢ Group’s EBITDA target: due to travel restrictions, EBITDA target announced in July is no longer valid despite our confidence in the robustness of our results

Yann Leriche, Group Chief Executive Officer commented: "In the third quarter, the Group has served its customers by providing excellent sanitary conditions. We have used our flexible offering by providing services to meet very high demand on certain days, while adapting very quickly when travel restrictions are announced. Our financial leeway is preserved by rigorous cost management and the remarkable commitment of our teams. The Group is well prepared to make the most of the future post Brexit on 1 January 2021 as well as the changes unfolding in the world.”

Revenues for the third quarter (1 July to 30 September)

Due to the ongoing impact of the COVID-19 pandemic, the Group’s consolidated revenue reduced by 17% in Q3 2020 compared to the same period in 2019 at a constant exchange rate, to €252.1 million.

Eurotunnel’s revenue was €219.8 million in the third quarter of 2020, 19% below the same period last year. Total Eurotunnel revenues for the quarter declined to a lesser extent than in the first half of the year (-32%) thanks to the relatively good performance of the Group’s Shuttle activities.

At €181.2 million, Eurotunnel’s Shuttle revenue was down by only 2% in the third quarter of 2020 as a result of the bounce back observed following the temporary lifting of UK quarantine measures during Le Shuttle’s peak summer season, the resilience of the Truck Shuttle’s traffic and the positive effects of the Group’s yield management strategy.

Railway Network revenue dropped by 57%, due to lower Eurostar passenger numbers and to a reduction in the number of cross-Channel rail freight trains.

Europorte’s revenue increased by 3% for the third quarter of 2020 to €32.2 million, reflecting the segment’s recovery.

The forecasts prepared by the Group in July were based on the absence of new confinement or travel restrictions. Given the second wave of the sanitary crisis, the Group has decided to withdraw its guidance announced on 23 July 2020 of a consolidated EBITDA target for 2020 of €350 million, as it was based on assumptions that are no longer valid. 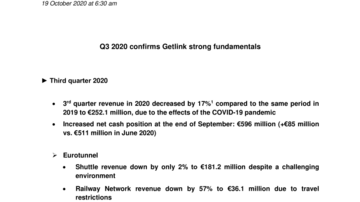