NOTE TO EDITORS - Media tools set up by Eurotunnel for Brexit

In order to allow the media to cover the entry into force of Brexit on the night of December 31 under the best possible conditions, Eurotunnel will set up a media system that meets the site's security requirements and the constraints of the current health context.

As access rules severely limit media reception capacities, a press agency pool system will be active from 31 December at 9 p.m. until 01 January at 4 a.m. in order to provide the other medias images and footage from the site that night.

As a reminder, as the operator of the only land border between France and the United Kingdom, Eurotunnel will see the introduction of new administrative formalities for crossing the border by freight vehicles as soon as Brexit comes into force on Thursday December 31 at midnight. This change will not impact the normal operation of the Channel Tunnel which will remain open and operational throughout the night from 31 December to 01 January.

1. Media plan for the Brexit Night: Pool of news agencies from 9pm to 4am

The pool will be composed of the following news Agencies: APTN, Reuters and AFP TV

No other media allowed that night on site or in trucks.

The pool will be deployed at the French and British terminals of Eurotunnel. He will film and photograph the first trucks crossing the border, in both directions, before loading onto the Shuttles and disembarking in the destination territory (France or United Kingdom).

As a reminder, Brexit entries into force at 23:00 British time and midnight French time.

Here are the strategical places where the pool will be deployed in France:

Here are the strategical places where the pool will be deployed in the UK:

Do you have existing images & footage?

Will it be possible to seat and travel with one of the drivers?

No. For security reasons, Eurotunnel’s facilities are under the protection of authorities for antiterrorism matters and cameras are not allowed on site except the ones accredited for the pool.

Will the management be available for interviews?

Requests for live interviews with the CEO and spokespersons will be managed on a case-by-case basis.

Please note that there will be no duplex possibilities from the site that night.

Can I visit the days before?

Our Press teams make every effort to meet the maximum number of shooting requests ahead of the event, from Wednesday 30 December. If you are unable to accommodate you, we invite you to visit the site: www.Salledepresse.com, Playlist Eurotunnel Brexit to access the many free sequences already available.

Can I visit the days after?

We will do our best to welcome the cameras on the following days until Monday 04 January, as part of the accreditation process and sanitary restrictions, as well as with respect for the well-being of the teams already heavily strained by this event.

What are we going to see and when?

In the UK, the first truck arriving will drive straight onto the M20 and, if necessary, will be controlled in an off-site area further away.

In France, if the first truck has green status it will drive straight onto the motorway; if it has orange status, it will be directed toward Tunnel’s Customs-SIVEP centre run by French authorities.

The status of the trucks will be determined by the authorities on a case-by-case basis.

Will it be possible to meet with drivers?

The pool's press agencies will conduct interviews with the drivers on the night of December 31. Otherwise, drivers’ interviews are not possible during that night on our site.

Will it be possible to interview authorities?

For media requests for the authorities please liaise directly with:

What will change in practice after Brexit for freight?

All formalities will be pre-filled by customers and uploaded on a virtual wallet, Eurotunnel Boarder Pass. For those who did not subscribe to this service, drivers transporting their goods will be asked to hand over the documents necessary for their passage to the Eurotunnel agents in charge of the Pit Stop who will scan it and then send it digitally to customs for processing. At their arrival in France or in the UK, the trucks will then be directed to specific routes based on the nature of their goods.

As a reminder, the Channel Tunnel sites on the French and British sides are subject to safety and security obligations, including: 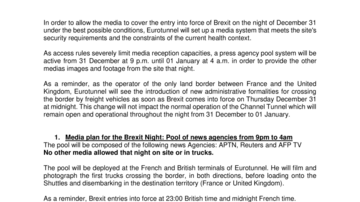