During the period of intense traffic around the school holidays for Christmas and the New Year, Eurotunnel’s Le Shuttle broke its previous volume record.

Between Friday 14 December 2012 and Sunday 06 January 2013 a total of almost 200,000 passenger vehicles (including cars, motorcycles, vehicles with trailers, caravans, camper vans and coaches) crossed the Channel (both directions) between Folkestone and Calais using the 35 minute Shuttle service. This is the equivalent to approximately 1 million passengers. This is the highest level of Shuttle traffic, during a comparable period, since 2001.

And a second record was broken at the same time: on Sunday 06 January 2013, more than 1,000 dogs and cats1 also used Le Shuttle heading back to the UK, beating the previous record of 926 pets set on 03 January 2012. Eurotunnel Le Shuttle is the first choice for pets as they can stay with their owners throughout the crossing. 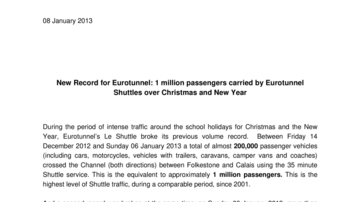