New increase in revenue for the first quarter of 2019

"For the first quarter of 2019, the Group has mobilised on all fronts, especially in the initial Brexit context of 29 March, in order to deliver the best possible quality of service and to meet our customers’ expectations.”

Strong impact from the work-to-rule carried out by French customs officers in March, which resulted in the loss of an estimated 110,000 Eurostar passengers and several thousand trucks and cars on Le Shuttle travelling from France to the UK.

Passenger traffic is slightly down for the quarter as a result of an unfavourable calendar effect with Easter departures falling in April this year.

Eurostar, spurred by the dynamism of the London – Amsterdam service, saw further growth.

Delivery of Brexit-related infrastructure for the French authorities including pit-stops for trucks, a customs and sanitary/phyto-sanitary centre, and e-gates.

Continued growth in the context of strong competition.

Positive impact of the new rail infrastructure management contacts in the Greater East (GIC) and the Hauts-de-France region (PGI), which began during 2018 for Socorail.

Certification received on 31 January and 11 February respectively from the French and British energy regulators. At €221.8 million, Eurotunnel’s revenues increased by 4% in the first quarter of 2019. Including Europorte, the Group’s consolidated revenue totalled €254.4 million, an increase of 5% at a constant exchange rate.

Shuttle revenues totalled €146.9 million, an increase of 5% over the same period last year thanks, in particular, to an increase in the yield, made possible by the quality of service.

Railway Network revenue grew by 2%, driven by Eurostar traffic, a growth unfortunately impacted by the work-to-rule action by French customs.

Europorte saw a further strong increase in its revenue of 9% to €32.3 million, driven in particular by the operational launch on 1 January of the contract with the Total Group.

Truck Shuttles: Truck traffic saw a 4% growth in the first quarter driven by a record month of March, despite the work-to-rule action by French customs officers. This is mainly due to stockpiling in anticipation of Brexit. Eurotunnel confirmed its place as the leader in the market, with a market share close to the previous year.

Passenger Shuttles: Car traffic saw a 2% decrease with 478,494 vehicles transported in the context of an unfavourable calendar comparison, with this year seeing Easter weekend departures in April instead of March. The Shuttle car market share is 62.8% in the first quarter of 2019, an increase of 1.6 points compared to the first quarter of 2018.

High-speed trains: Eurostar saw traffic of close to 2.4 million passengers, an increase of 1%, despite action by the impact of the “yellow vest” movement as well as the work-to-rule by French customs officials in March. This growth is driven by the sustained success of the London – Amsterdam service launched on 4 April 2018. The addition of a third departure in June will see this continue to grow.

Cross-Channel rail freight trains: Traffic continues its momentum and saw an increase of 4% in the first quarter of 2019 compared to the previous year, with an increase in existing services (with the help of ETICA) and an improved quality of service.

This positive quarter, marked by strong organic growth and the strengthening of pricing power, confirms the Group’s position regarding its long-term outlook. Overall, in the current context, the Group confirms its EBITDA forecasts to 2022. 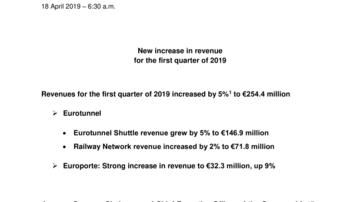 New increase in revenue for the first quarter of 2019