Eurotunnel has set two new records for our four-legged friends travelling back from their Christmas holidays from Calais to Folkestone, welcoming and checking 2,143 pets on the 4th January and 2,166 on the 5th January, beating the previous record set in January 2019 by almost 8%.

This shows the popularity of our Pet Travel Scheme service and demonstrates the comfort of a 35-minute trip on Le Shuttle, with owners staying in their vehicles accompanied by their pets. Their economic contribution to French tourism is estimated at around €300 million a year.

Jacques Gounon, Chairman and CEO of Getlink, said: “I hope that European Union negotiators will ensure that they quickly conclude an agreement with the United Kingdom during the Brexit transition period, so that pet travel controls remain as efficient and protective as they are today.” 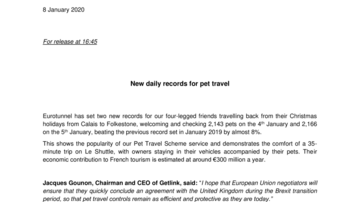