“In a hostile environment and following an exceptional year in 2012, the Eurotunnel Group continues to strengthen its market shares across the board and is pleased about the improved profitability of Europorte”.

Significant events in the half year

On 14 June 2013, the Intergovernmental Commission2 granted the railway operator Deutsche

Bahn a certificate (Certificate B) to operate passenger services through the Channel Tunnel. This will bring about the end of the Eurostar monopoly and will considerably enhance the exchanges between Great Britain and Northern Europe (Germany, Holland). Over time, this represents a potential 3 to 4 million additional passengers per year for the Eurotunnel Group, to add to the 10 million already using the current high speed train services.

To address the lack of specific training available in key skills, the Eurotunnel Group has endowed the Chair of “Railway Transport Sciences” at the Ecole des Ponts Paris Tech and the Fondation des Ponts, with a view to advancing the entire scope of railway technology (operations, traffic management, safety, technology lifecycles, respect for the environment and the economics of transport services).

Eurostar filed a claim with the Intergovernmental Commission, against the production of

Eurotunnel’s 2014 Network Statement. The Eurotunnel Group confirms that its tarif structure is adapted, transparent and conforms to European legislation.

Eurotunnel learnt from the press on 19 June 2013 that the European Commission had sent a formal letter to the British and French governments concerning some conditions of the application of the 2001 First Railway Package (Directives 91/440/CEE and 2001/14/CE) relating to the Channel Tunnel whilst specifying that the Shuttle Services activity is not concerned by this issue. The states immediately refuted the findings of the European Commission. The Eurotunnel Group has restated that the private investors who, without any support raised over €14 billion for the construction of the Fixed Link, have a right to a legitimate return on their investment.

The Eurotunnel Group has appealed to the Competition Appeal Tribunal against the decision by the British Competition Commission on 6 June 2013 to prohibit its operation of ferry services from the port of Dover. This decision goes against that of the French competition authority which gave its approval for the acquisition of the ferries, subject to certain committments, on 8 November 2012.

For the first time in its history Groupe Eurotunnel SA has repaid a portion of the capital of its debt and not simply the interest, proof again of the profound improvement in its financial structure.

The Fixed Link: strength in an increasingly competitive context

In the first half of the year, the growth in the Passenger Shuttle’s car activity was above that of the Short Straits market (+0.4%), bringing market share to 52.8% for the six-month period. The Fixed Link’s coach traffic also leapt by 12% due to the launch of new scheduled services in the second half of 2012. Truck Shuttle traffic, which benefitted in 2012 from a volume effect leading up to the London 2012 Olympic Games and from the end of SeaFrance services, has not seen similar exceptional phenomena reoccur this year. The Short Straits truck market remains 7% lower than it was in 2008, before the economic crisis unfolded. Market share for the Truck Shuttles remains above the average level for the years leading up to 2012, demonstrating the Group’s remarkable strength.

In the first six months, revenues from use of the railway network increased by 2%, in line with traffic on high speed passenger trains, which took off again in the second quarter with the leisure market showing signs of strength.

Activity from rail freight grew by 12% due to the transport of steel and the regeneration of some intermodal flows.

Europorte which includes the rail freight subsidiaries of Groupe Eurotunnel SA in France and the UK continues to see strong growth based on the signature of new contracts and the increase in volumes in some existing contracts. GBRf has consolidated its position as the third largest rail freight operator in Great Britain, carrying increased amounts of biomass, coal and aggregates.

Above all, however, Europorte has made a substantial improvement in its operating margin, as can be seen in the €9 million increase in EBITDA.

MyFerryLink: a new activity which is attracting customers seeking quality

The acquisition of the ships previously owned by SeaFrance was approved by the French competition authority on 8 November 2012. Following a negative opinion in its provisional findings report on 19 February 2013, the UK Competition Commission confirmed on 6 June 2013 its decision to prohibit MyFerryLink any activity at the port of Dover. The Eurotunnel Group and the SCOP SeaFrance immediately appealed this decision.

This decision by the Competition Commission has created a damaging incertitude at a time when the presence of large numbers of passengers on board the Berlioz, the Rodin and the Nord Pas–de-Calais is witness to the professionalism of the MyFerryLink crews and to the need for additional options for transport professionals combined with an increased level of quality of service.

Financial results based on cost management

The consolidated figures for the first half year show a stable EBITDA (at €199 million) despite the difficult economic environment and the launching of the new maritime activity. The revenue and the trading result remain subject to strong seasonal variations over the year.

The operating costs for the Fixed Link have decreased by 2% to €159 million and the increase in Europorte’s costs has been limited to 2% even though revenue has increased by 11%.

For the first six months of 2013, net finance costs have increased by €15 million compared to 2012, mainly due to the contractual increase in margin on Tranche C of the debt from July 2012.

Cash held by the Group at the end of June amounted to €159 million (compared to €256 million on 31 December 2012), following debt servicing, capital investments and the payment of €65 million in dividends.

For the first half of 2013, the Eurotunnel Group recorded a net loss of €18 million.

Excluding the loss of €19 million generated by the MyFerryLink activity, the net consolidated result for the Group remained stable at €1 million for the first six months of 2013, compared to the same period in 2012 recalculated at a constant exchange rate. 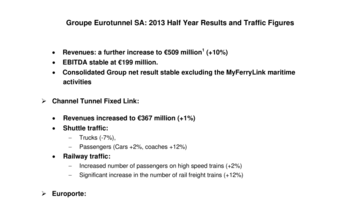