Groupe Eurotunnel revenue and traffic figures for the first quarter 2013

Consolidated revenues increased by 8%1 to €238.3 million

“The start of the year has been marked by a severe winter which disrupted both road and rail traffic on several occasions. In a difficult economic climate and in the absence of the positive leverage brought by the London 2012 Olympic Games, the Eurotunnel Group has maintained, an attractive and efficient level of service across all segments of activity, as reflected in the rise in revenues”.

The Fixed Link segment recorded a 1% growth in revenues for the first quarter of 2013 at a constant exchange rate to €171.7 million.

Revenues from the core business, the transport of trucks and passenger vehicles on board the Shuttle Services, represent €100.9 million. The competitive advantages of Eurotunnel’s Shuttles, their speed, ease of use and reliability, are recognised by the customers who appreciate the “premium” nature of the service and there are many to appreciate it.

Revenues from payments made by the rail operators reached €68.2 million, an increase of 2% for the first quarter.

The rail freight subsidiaries generated €55.4 million in the first quarter, a 9% increase in revenues for the period.

From a standing start in 2012, MyFerryLink had to wait until road hauliers were free from their contracts with its competitors before it could attract traffic to the three recently acquired ferries. Revenues at €11.2 million for the quarter, show the increasing performance of MyFerryLink. The number of cars transported increased by 4% to 445,653: the Le Shuttle car segment continues to grow and increased its market share by nearly 1 point.

Le Shuttle has again broken the record for vehicles carried. On 29 March (Good Friday), 10,646 cars (including motorcycles, vehicles with trailers, caravans and campervans) and 131 coaches travelled by Shuttle from Folkestone to Coquelles, the highest volume of traffic ever achieved since the opening of the Channel Tunnel.

Truck Shuttle traffic is naturally enough 9% lower, at 333,167 vehicles, due to the bad weather over the particularly harsh winter, which led to significant disruption on both sides of the Channel. Otherwise the first quarter of 2012 also benefited from the end of SeaFrance services (which ceased in November 2011). Traffic volumes nonetheless remain 11% higher than in the first quarter of 2011.

In a context where road hauliers are still suffering from the economic crisis, their loyalty to the Eurotunnel service is a source of satisfaction as traffic levels remain high. A positive indicator is that the truck market continues to grow, even though it is still below the levels seen before the economic crisis in 2007. All else being equal, it is now possible to identify the positive impact that the preparations for the London 2012 Olympic Games had on the market in 2012: Eurotunnel estimates that this brought 10,000 trucks over the quarter.

With 2,232,516 passengers, Eurostar suffered from the heavy snow that fell during the winter, particularly on 12 March, when all Eurostar services on the French national railway network were cancelled by SNCF.

The number of rail freight trains increased by 6% during the first quarter to 624 trains. The activity was helped by the return of some intermodal services and by the transport of steel, even though the additional toll imposed by Reseau Ferré de France on each train travelling through the Tunnel remains an obstacle to growth.

Europorte, which is composed of the rail freight subsidiaries of the Eurotunnel Group, continues on the path to growth by being selective in the contracts it seeks, in order to optimise its cost structure. The first quarter has seen notably an expansion in the cereals sector with an increase in volumes and a geographical coverage (Belgium, South of France and Eastern France), from a base of grain production centred on Dijon and la Bourgogne Champagne, making Europorte the principal operator in this sector in the region.

GB Railfreight, the third largest rail freight operator in the UK also continues to expand. Amongst numerous contracts, the completion of the Bluebell line stands out for its innovation. Following 18 months of clearing and removing rubbish from a cutting, GB Railfreight’s work has enabled the historic Bluebell line to be reopened all the way from Sheffield Park to East Grinstead for the first time in 50 years. GB Railfreight used Class 66 locos hauling 20 wagon trains to transport the rubble. Each train removed 100 truck movements from local roads in Sussex.

The Opale Coast International Railway Training Centre (CIFFCO) continues to train railway staff in many different railway specialisations, both for the group and for third parties. Europorte which employs many of the trainees at the end of their courses is working to ensure that its employees have favourable working conditions, in line with strict railway safety standards.

MyFerryLink, which has magnificently overcome all the handicaps which have been imposed on it as a result of its late start up (in August), has seen its traffic volumes increase each day, an indication that customers are looking for an alternative maritime operator and real choice in cross-Channel ferry services. The number of trucks carried increased to 56,795 for the first quarter and the number of passenger vehicles to 30,323. The ships demonstrate their suitability for the Dover-Calais market every day and the SCOP staff has more than proven its skill and professionalism. However, the preliminary report from the British Competition Commission, in complete contradiction to the verdict reached by the French Competition Authorities (which gave the green light to the acquisition of the ships by the Eurotunnel Group on 8 November 2012), and incompatible with the decision of the Paris Commercial Court, could, if it is confirmed, lead to a situation which would penalise customers. The Eurotunnel Group considers that this maritime activity has demonstrated its relevance, its value and its potential for customers. 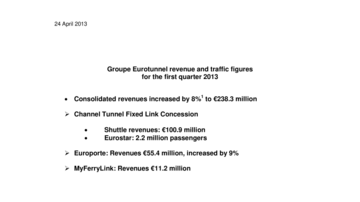 Groupe Eurotunnel revenue and traffic figures for the first quarter 2013