Q3 2021 : Getlink maintains its performance in the third quarter

Yann Leriche, Group Chief Executive Officer commented: "In the third quarter, the Group faced tightened health restrictions unlike last year. However, the discipline implemented as part of the cost reduction plan, and the launch of new services such as our unaccompanied freight service and our partnership with CONEX allow the Group to take full advantage of developments in its various markets and to reinforce its leadership."

Revenues for the third quarter (1 July to 30 September)

Due to the ongoing impact of the Covid-19 pandemic, the Group’s consolidated revenue reduced by 13% in Q3 2021 compared to the same period in 2020 at a constant exchange rate, to €223.1 million.

At €148.7 million, Eurotunnel’s Shuttle revenue was down by 20% in the third quarter of 2021 compared to the same period last year, as a result of UK quarantine measures not being lifted during Le Shuttle’s peak summer season.

Railway Network revenue is up by 5%, driven by the gradual resumption of Eurostar traffic.

Europorte’s revenue is stable at €32.3 million.

Revenue for the first nine months (1 January to 30 September) For the first nine months of 2021, the Group’s revenue decreased by -13% to €549.3 million, impacted by the effects of the health crisis and Brexit. 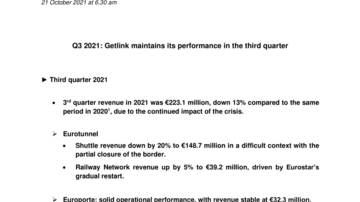 Q3 2021: Getlink maintains its performance in the third quarter