Getlink: Further increase in revenues for 2017

“Despite the uncertainties surrounding Brexit, the Group has delivered a 4% growth in revenues and has once again demonstrated the strength and balance of its economic model, no matter the circumstances”.

The ETICA programme, which aims to develop new services has been expanded to include high speed operators which will enable Eurostar to prepare for the launch of its new service to Amsterdam and will encourage other high speed operators to consider further destinations, as identified in the PWC study from December 2013 (Frankfurt, Cologne, Geneva...)

Additional volume growth from major customers in the automobile, chemicals and cereals sectors thanks to the quality of service obtained.

The Group’s consolidated revenues grew to €1.033 billion, an increase of 4% at a constant exchange rate. Getlink continues its growth momentum, after increases of 4% in both 2015 and 2016, and in 2017 has reached a record level of revenues. This is the eighth consecutive year of revenue growth at constant exchange rates and scope of consolidation.

Revenue from Shuttle Services increased by 3% to €604.1 million compared to 2016 through increased yields.

Revenue from the Railway Network increased by 4% thanks to the good levels of Eurostar traffic.

Europorte’s revenue increased by 2%, mainly due to additional activity of major customers in the automobile, chemicals and cereals sectors and to the startup of new traffic for customers such as Lhoist Castine and Lafarge.

Truck Shuttles: The Truck Shuttle business saw stable volumes for the year, only 4,000 vehicles short of the record set in 2016, and this despite the bad weather at the start of the year in southern Europe which significantly impacted traffic. Le Shuttle Freight has confirmed its position as the leading player in the market with a 39.1% market share for the year.

High speed trains: After two years impacted by terrorist attacks, Eurostar recorded an increase in traffic for the year 2017 and, importantly, a new traffic record for the month of December (+1.6% vs December 2016). The upcoming launch of services between London and Amsterdam bodes well for the growth of this traffic through the Tunnel.

Cross-Channel rail freight saw a significant increase (+12%) in 2017 through the policy of supporting the re-introduction of routes.

The Group’s full year results will be published on Wednesday 21st February prior to the opening of trading. 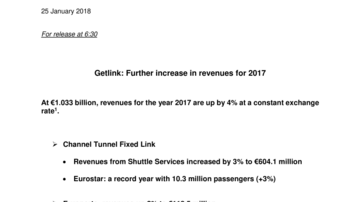 Getlink: Further increase in revenues for 2017