Jacques Gounon, Chairman and CEO of the Group said:

“We estimate that the uncertainties surrounding Brexit and the social movements in France have adversely impacted the revenue by about €18 million. In spite of this we delivered a solid performance recording a tenth consecutive year of revenue growth. We shall continue to deploy our strategy in this less uncertain environment by working to improve our operational performance, serving the transition to an environmentally-focused economy.”

Revenue from the Railway network increased by 3% to €315.1 million driven by growth in Eurostar traffic, notably due to the launch of the third daily London – Amsterdam service as well as to contractual indexation.

Europorte’s revenue increased by 4%, an increase linked to new national and international traffic in 2019, as well as specific contracts, such as the traction of Léman Express services.

The advantages of the Tunnel, namely its safety, reliability, speed, frequency and environmentally friendly status are still widely appreciated by our customers, proved by the 21 million passengers carried this year.

The Group’s annual results will be published on Thursday 27 February before opening of trading. 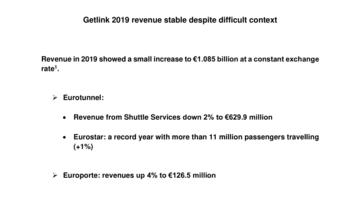