In 2018, more than 2.7 million passenger vehicles crossed the Channel aboard Passenger Shuttles, an increase of 2%. Car traffic has reached a record high since 2000.

Rail freight continues its momentum with 2,077 trains, an increase of +3%

The ETICA programme, aimed at developing new cross-Channel services, has allowed Eurostar to launch its new service to Amsterdam, which has been more successful than expected. Eurostar has announced new services to Amsterdam for next summer.

Reinforcement of volumes in the petrochemical and cement segments of its rail traction business and renewal of contracts expiring at the end of the year, gain of a new railway handling contract at the industrial site of a major oil group.

Work and safety studies continue according to schedule. This is the 9th consecutive year of revenue growth at constant exchange rates and scope of consolidation.

Revenue from Shuttle Services increased by 6% to €636.4 million compared to 2017 through increased traffic and yields.

Revenue from the Railway Network increased by 5% thanks to the good levels of Eurostar traffic and the new London – Amsterdam service.

The 7% decrease in other income is mainly due to non-recurring revenue received in 2017.

Europorte’s revenue increased by 2%, mainly due to an increase in activity among its main customers. Truck Shuttles: Le Shuttle Freight business set a new all-time record with more than 1.693 million trucks travelling in 2018, 3% better than 2017. Le Shuttle Freight has confirmed its position as the market leader with 40.9% market share over the year, a gain of 1.8 points over 2017. The Truck Shuttle service largely outperformed a market contraction of 1.1%.

Le Shuttle Passenger: Car traffic regained a positive momentum with a 3% growth in traffic, setting a new record since 2000, with more than 2.66 million vehicles travelling. Le Shuttle's car market share was stable at 54.6% in 2018.

High speed trains: Eurostar recorded a sharp increase in traffic over the whole of 2018 and has set a new all-time record with 10.97 million passengers travelling, surpassing the previous one by more than half a million travellers. The opening of reservations for a third daily service on the London – Amsterdam direct route in June 2019 is a sign of confidence in demand.

Cross-Channel rail freight is up 3% in 2018 thanks to the ETICA scheme to relaunch traffic.

The annual results of the Group will be published on Thursday 21 February before opening of trading. 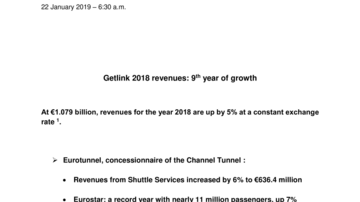