Further strong revenue increase for the first quarter of 2018

Europorte: increase in revenue of 3% to €29.7 million

"For the first quarter of 2018, the Group has again published excellent results, with another record first quarter2. The growth on both sides of the Channel and progress made in the Brexit negotiations allow us to forecast EBITDA of more than €735 million in 2022."

Jacques Gounon, Chairman and Chief Executive Officer of the Group

For the first time in its history, on 25 January 2018 Le Shuttle Freight carried more than 7,000 trucks in one day.

The Flexiplus service achieved record traffic on 17 February, with 1,999 passenger vehicles transported, just over 20% of all passenger traffic on that day.

Passenger traffic was boosted by the favourable calendar effect this year, with the Easter weekend departures falling in March.

The introduction of two new cross-Channel rail freight services to Italy and Germany.

Continues to grow and to renew contracts with existing customers.

At €211.7 million, revenues for the Fixed Link showed an increase of 6% for the first quarter of 2018. Taking into account Europorte revenues, the consolidated revenue for the Group reached €241.4 million, an increase of +5% at a constant exchange rate.

Revenues from the Shuttle business reached €138.3 million, an increase of +7% compared to the same period last year, largely due to an increase in yield.

Revenue from the Railway Network grew by 3%, largely due to the increase in Eurostar traffic. This underlying trend should continue through the rest of the year with the opening, on 4 April; of the direct London to Amsterdam service.

Europorte further increased in its revenues to €29.7 million.

Truck Shuttles: truck traffic saw an increase of 3% for the first quarter. Eurotunnel has cemented its place as the leader in the market, +210 basis points for the first three months and continuing on a solid path.

Passenger Shuttles: Despite unfavourable weather conditions for tourism at the start of the year, car traffic, which is up by 4% at 487,203 vehicles, was helped by a favourable calendar effect with the Easter holiday getaway falling in March this year. The car market share for Le Shuttle is 61.1% in the first quarter of 2018.

High-speed trains: Eurostar recorded a traffic of 2.38 million passengers, an increase of 5%, an underlying trend which should continue in the second quarter with the opening of the new London to Amsterdam service on 4 April.

Cross-Channel rail freight continues the progress observed at the end of last year and has delivered an increase in traffic of +6% in the first quarter of 2018 compared to the previous year. The work done by Eurotunnel and its partners to relaunch traffic is bearing fruit with the start of two new cross-Channel rail freight services to Germany and Italy.

This positive quarter, marked by strong organic growth and the strengthening of pricing power confirms the Group’s position in regard to its long-term outlook. Overall, in the current context of positive progress in the Brexit negotiations, the Group believes it will achieve an EBITDA of above €735 million (at £1=€1.14) by 2022. 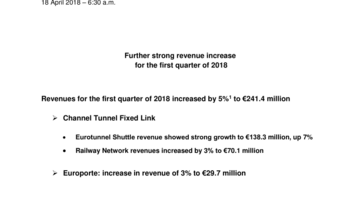