First quarter 2020: anticipated reduction in revenue due to COVID-19 impact

➢ Europorte: revenue down -5% to €30.7 million, mostly due to the SNCF strike in January

Jacques Gounon, Chairman and Chief Executive Officer of the Group said: "Travel restrictions linked to the current health crisis have affected the Group’s traffic and revenue in similar proportions to comparable modes of transport. In the coming weeks, the Group will build on its key strength linked to the supply of essential products to the United Kingdom and France. Having reacted immediately by implementing protective measures and reducing costs, the Group is ready to meet the expectations of its customers following the ending of lockdown."

Consolidated revenue for the Group is down -9% to €233 million, at a constant exchange rate, due to the impact of the COVID-19 pandemic and the restrictions imposed by the UK and continental European governments regarding movement.

Revenue for Shuttle activity was €133.6 million, down -9% in comparison to the same period last year, linked to the reduction in Passenger Shuttle traffic and the voluntary reduction in capacity on Truck Shuttles, to guarantee social distancing for drivers. Q1 2019 traffic was enhanced by stockpiling in the UK before the first Brexit date in March 2019.

Revenue for the railway network was down -8% to €66.6 million, due to the strong decrease in round trips between countries served by Eurostar.

Europorte has seen a decrease in its revenue of -5% to €30.7 million, due to the strike by SNCF from 13 January and the COVID-19 crisis from 16 March. Despite industrial sites closing, Europorte continues to ensure all customer orders.

1 Including motorcycles, vehicles with trailers, caravans and motor homes.
2 Only Eurostar passengers travelling through the Channel Tunnel are included in this table, excluding those who travel between continental stations (such as Brussels-Calais, Brussels-Lille, Brussels-Amsterdam, etc.).
3 Rail freight services by train operators (DB Cargo for BRB, the SNCF and its subsidiaries, GB Railfreight, Rail Operations Group, RailAdventure and Europorte) using the Tunnel.

Getlink considers that decisions taken by the public authorities to deal with the current health crisis means that it is no longer possible to maintain 2020 EBDITA objectives. Getlink is awaiting the decisions to come from the various governments in order to be able to communicate later on a revised 2020 EBITDA target. The Group, strengthened by its available cash, also confirms that it can meet all debt service deadlines in 2020. The Group finally believes that, with its three components Eurotunnel, Europorte and ElecLink, it can be a driving force in any planned economic recovery, particularly regarding any potential environmental components. 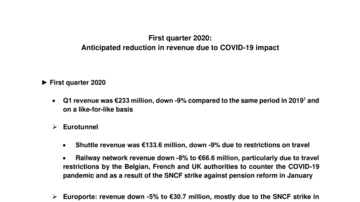 First quarter 2020: anticipated reduction in revenue due to COVID-19 impact