Eurotunnel has, for the 16th time, been awarded the highly prestigious Green Flag Award® for the 30-hectare Samphire Hoe nature reserve at the foot of the beautiful White Cliffs of Dover.

The Green Flag Award® scheme recognises and rewards well managed parks and green spaces, setting the benchmark standard for the management of recreational outdoor spaces across the United Kingdom and around the world. This Award illustrates the continuity of the Group’s commitment to biodiversity, a major pillar of its environmental strategy.

After 18 months of seeing UK parks and green spaces play a key role during travel restriction periods as places to relax, exercise and meet friends and family, the Green Flag Award won by Samphire Hoe rewards the passionate work of the team which makes this space a pride of the Getlink Group.

An inspiring nature reserve, Samphire Hoe was created from the spoil extracted during the construction of the Channel Tunnel which Eurotunnel sought to re-purpose to protect the environment. Over the years it has gradually become a nature reserve with a rich degree of biodiversity, described by the judges as ‘a real jewel in Kent’s crown’.

The White Cliffs Countryside Partnership oversees the day to day running of the Hoe, alongside a fantastic group of volunteers who help keep the Hoe up to the standard it is today.

Green Flag Award Scheme Manager Paul Todd said: “I would like to congratulate everyone involved in making Samphire Hoe worthy of a Green Flag Award. To meet the requirements demanded by the scheme is testament to the passionate work of the staff and volunteers who do so much to ensure that Samphire Hoe has high standards of horticulture, safety and environmental management and is a place that supports people to live healthy lives.”

Paul Holt from the White Cliffs Countryside Partnership said “I am delighted Samphire Hoe has been awarded the Green Flag Award for a 16th time. We have seen record numbers of visitors to the Hoe over the past 18 months, often being referred to as “a place of sanctuary” during these difficult times.  With the wonderful help of all the volunteers we have still been able to keep the ethos of Samphire Hoe going.” 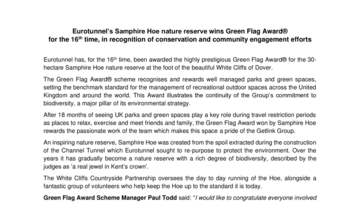 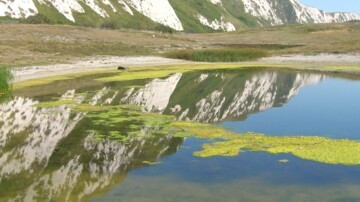