Eurotunnel has, for the 15th time, been awarded the highly prestigious Green Flag Award® for the 30-hectare Samphire Hoe nature reserve at the foot of the beautiful White Cliffs of Dover.

The Green Flag Award® scheme recognises and rewards well managed parks and green spaces, setting the benchmark standard for the management of recreational outdoor spaces across the United Kingdom and around the world.

A crown jewel of Kent

Each year parks, green spaces and nature reserves take part in a judging process which sees a panel visit individual sites marking them on their environmental qualities, community involvement and green credentials.

An inspiring nature reserve, Samphire Hoe was created from the spoil extracted during the construction of the Channel Tunnel which Eurotunnel sought to re-purpose to protect the environment. Over the years it has gradually become a nature reserve with a rich degree of biodiversity, described by the judges as ‘a real jewel in Kent’s crown’.

The White Cliffs Countryside Partnership oversees the day to day running of the Hoe, alongside a fantastic group of volunteers who help keep the Hoe up to the standard it is today.

A massive increase in the number of visitors

The coronavirus pandemic has seen an increased interest in visiting outdoor spaces, with the Hoe recording its highest number of visitors for the months of July and August since it opened in 1997, with more than 46,800 visitors, an increase of 50% compared to 2019.

Commenting on Samphire Hoe’s success, Keep Britain Tidy Chief Executive Allison Ogden-Newton OBE said: “This year, more than ever, our parks and green spaces have been a lifeline and we know that millions of people have used them to relax, meet friends, exercise or simply escape for a short time. It is testament to the incredible dedication and hard work of parks staff and volunteers that, despite the challenges that went along with record numbers of visitors, Samphire Hoe has achieved the highest international standards demanded by the Green Flag Award.”

Paul Holt from the White Cliffs Countryside Partnership said ‘It is with great delight that we have been given the Green Flag Award, 2020 has been an unusual year and has seen the visitor numbers at Samphire Hoe increase massively.  With the wonderful help of all the volunteers we have still been able to keep the ethos of Samphire Hoe going.  It is a place for people and a place for wildlife. Maintaining the balance between the two is key’. 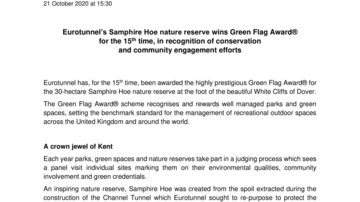