Eurotunnel recorded record traffic volumes for the half term and the Queen’s Platinum Jubilee holidays[1].

Between Monday 30 May and Sunday 5 June, more than 57,000 passenger vehicles[2] crossed the Channel on Passenger Shuttles, enabling approximately 180,000 people to reach their holiday destination or to take part in the festivities organised for the Jubilee, against a background of generally increasing traffic. The Flexiplus service was highly favoured over the period, with a take up which has more than doubled since a comparable period in 2019.

Passengers who travelled through our terminals were also able to benefit from Duty Free sales which have re-started in the Victor Hugo (Folkestone) and Charles Dickens (Coquelles) terminal buildings following the UK leaving the European Union. These two shops, with a retail surface of 600m2 in Folkestone and 800m2 in Coquelles offer a retail experience to match airports, with more than 3,200 of our British customers’ favourite products ranging from French gastronomy to luxury perfumes, and from international brands to local produce, at prices up to 50% lower than UK high streets.

Deborah Merrens, Eurotunnel Chief Commercial Officer, stated “We are thrilled to see customers returning in such numbers and choosing our service. Our staff once again showed their unfailing commitment, adding further strength to Le Shuttle’s position as cross-Channel market leader”. 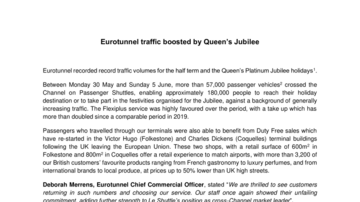