Exceptionally, Eurotunnel is making public some of its activity indicators for the month of October 2008, which have held up and have exceeded expectations, despite the temporary unavailability of one of the six intervals of the Channel Tunnel where a 650m section is being repaired.

5,676 missions (Eurotunnel Truck and Passenger Shuttles, Eurostar and goods trains) used the Tunnel in the month, during which operating conditions were fully optimised.

This number of missions is truly remarkable in the current unusual operating conditions: it is more than 60% of the average monthly missions recorded in 2007, a year in which Eurotunnel’s activity benefited from exceptional circumstances (the Rugby World Cup and several disruptions to port operations). It should also be noted that the Shuttles Services have achieved record load factors, in particular for the Truck Shuttle service which for the month of October had a load factor of around 90% (compared to 75% for 2007).

Maintaining this transport capacity has enabled the Group to reach a very symbolic milestone: on 11 October 2008, Eurotunnel carried the 14 millionth truck under the Channel on its Shuttles since the opening of this service in July 1994. Placed end to end, these trucks would stretch two-thirds of the way to the moon.

“Eurotunnel remains the uncontested leader of cross-Channel traffic and continues to transport an impressive number of vehicles and passengers every day. The Group thanks its customers for their loyalty and assures them that it is constantly working to improve.” 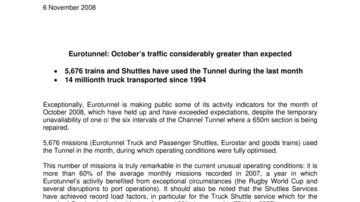