“On top of the excellent progress in revenues across the Group’s activities, the new all-time record for truck traffic recorded in March shows the potential of the Channel Tunnel, which will be further strengthened by the current investment programme”.

The Fixed Link segment recorded a growth of 6% in revenues, at a constant exchange rate, to €202.7 million.

Revenues from the core activity, transporting trucks and passenger vehicles on board shuttles, grew by 10% to €124.6 million due, not only to a growth in volumes, but also to an increase in yield. Eurotunnel continues to make a difference due to its premium service which combines speed, ease of use, reliability and a high level of departure frequency.

Revenues from the use of the railway network reached €74.5 million.

Revenues from the rail freight subsidiaries reached €77.0 million in the first quarter of 2015, an increase of 15% over the same period in the previous year.

The Truck Shuttle service saw an all-time record set in March with 140,009 trucks transported, and a market share of 38.2%, bringing the best possible finish to this first quarter. This record level of traffic reconfirms Eurotunnel’s strategy of innovation and investment in three new Truck Shuttles and the extension of the terminals in Folkestone and Coquelles.

Car traffic increased by 4% in the first quarter of 2015 with 464,305 vehicles transported, maintaining its growth trajectory in a competitive market. Eurotunnel provides services adapted to customers’ needs and to respond to the increase in British tourists making the most of the strength of sterling compared to the euro and who now prefer the Continent for their trips.

With 2,297,400 passengers in the first quarter, Eurostar’s traffic remained stable as a result of the attacks in Paris at the beginning of January and then the problems at the end of January and on 2 March, when traffic was interrupted on HS1 in the UK.

The number of freight trains in the first quarter increased by 11% to 787 trains. This growth is linked to the success of ETICA (Eurotunnel Incentive for Capacity Additions), the programme which started in 2013 for companies launching new intermodal freight services through the Channel Tunnel and which in 2014 was extended to new freight categories.

Europorte, which groups Eurotunnel’s rail freight subsidiaries, continues to grow whilst being selective in the contracts it takes on in order to optimise profitability. The signature of a 15-year contract with the Atlantic Port of Bordeaux to operate the Verdon terminal facility with the implementation of a logistics management chain running from unloading of ships to railway distribution is an important sign of interesting developments with contractors who seek quality of service and long term partnerships.

GB Railfreight, the third largest rail freight operator in the UK is also on a dynamic growth path despite a highly competitive market. Amongst the numerous contracts signed recently are the 15-year agreement with Serco to haul the Caledonian Sleeper and a five-year contract with Aggregate Industries. These contracts each bring annual revenues of around €7 million and demonstrate the potential the Group has in both transport and railway services. They are good examples of the Group’s ability to adapt to the specific needs of each customer.

On 19 February, at the 2015 UK Rail Industry Awards, GB Railfreight won the prize for “Railway Operator of the Year” for its performance in 2014.

MyFerryLink saw its traffic increase with 118,013 trucks and 42,898 cars transported in the first quarter of 2015; equivalent to a truck market share close to 12%.

Given the decision by the Competition and Markets Authority, the Eurotunnel Group is obliged to stop this activity despite its success and has put it up for sale. The operating contracts signed with the SCOP SeaFrance, an independent company which entered a safeguard procedure on 10 April 2015, come to an end on 2 July at the latest. The French authorities are closely monitoring events and are considering the structures that could enable the activity to continue. 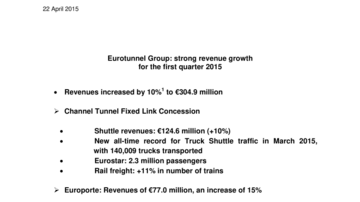