“In 2015, Eurotunnel achieved further growth in its annual revenues and saw a record year for its Truck Shuttles. Secure, and supported by the investments in Terminal 2015, the Channel Tunnel has never been more attractive and remains the clear leader in its market”. At €915.4 million, revenue for the Fixed Link was 3% up in 2015. Taking into account Europorte, the consolidated revenue for the Eurotunnel Group increased to €1.222 billion, an increase of 5% like-for-like.

Shuttle Services revenues increased by 5% to €579.7 million compared to the previous year due to an increase in yield and despite the disruptions to traffic in the summer due to migrants.

Revenues from the Railway Network are stable despite the migrant pressure this summer and the terrorist attacks in Paris on 13 November. The advantages of the Tunnel - safety, reliability, speed, frequency and respect for the environment - are valued by customers. The proof is that almost 21 million passengers were transported this year.

Europorte has fully played its role of vector for growth, recording a significant increase in revenue (+9%), arising from the signature of new contracts and from the renewal of existing contracts with Gefco, Exxon and Lafarge. The transport commissioning activity has also seen growth during the year. Finally, the seasonal trains were particularly active, not only with sugar and cereals, but also with the transport of vehicles driven by the strong growth (+9.5%3) in the European automobile market in 2015. 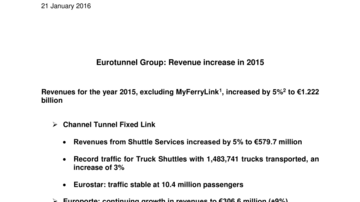